I must be a glutton for punishment because I continue to believe that platinum offers the most compelling value proposition of all of the metals in the precious metals sector of the commodities market. Platinum has been a real dog when it comes to price performance, but as a dog-lover, it makes sense that my conviction that platinum will once again howl at the moon as the price recovers is unshaken.

I have thrown all traditional discipline out of the window when it comes to building a physical position in platinum bars and coins. And, if the price drops again, I will buy more of the metal. I’d rather hold an ounce of gold in my hands than platinum, but at the current price differential, I’d prefer to add to longs in platinum than in gold, even though I own both precious metals.

After testing below the $800 per ounce level again in May and June, the price was heading toward for the $850 level on July 15. I have become so accustomed to disappointment in the platinum market that I am fully prepared for another tease on the upside and another visit below $800 per ounce. However, when platinum finally decides to blast off to the upside, I want to enjoy the ride.

The most direct route for a long position in platinum is via the physical or futures markets. The Aberdeen Standard Physical Platinum Shares product (PPLT) is the most liquid ETF for those who do not wish to hold the metal directly or venture into the futures arena.

Platinum has been the least precious of the precious metals

The price rises as open interest falls – not a great sign

Anyone who is waiting for a significant price recovery in the platinum market like me has become accustomed to disappointment. Time will tell if the current move that took the price of October NYMEX platinum futures to a high at $855.30 on July 16 will be another in a long string of failures.

As the daily chart shows, October futures reached the most recent low at $793.70 on May 30, and a marginally higher low at $795.50 on June 18. The peak at $855.30 on July 16, put platinum at the highest price since May 16. Price momentum and relative strength metrics are rising towards overbought conditions. However, the total number of open long and short positions in the NYMEX futures market declined from 92,094 contracts on June 21 to 76,824 contracts on July 16. The drop of 16.6% over a period where the price mostly appreciated. Rising price and falling open interest is typically not a technical validation of an emerging bullish trend in a futures market.

The weekly chart looks constructive for the platinum market.

As the weekly chart illustrates, price momentum in the platinum market crossed to the upside from an oversold condition. Relative strength is rising in neutral territory. The target on the upside stands at the 2019 peak at $907.90 per ounce on the continuous contract while technical support is at the late May low at $788.30. At around the $845 level on July 17 on the continuous contract, platinum was just below the midpoint of the recent trading range.

The monthly chart is also promising for the platinum futures market.

The longer-term chart shows that the momentum and strength indicators are both in neutral territory with platinum at just under the $845 per ounce level. Above the 2019 high, the next technical level on the upside stands at $1022.60, the high from early 2018. In early 2017, platinum traded to a peak at $1047.80, but the critical level of technical resistance stands at the August 2016 high at $1199.50. Gold broke above its 2016 peak in June, but platinum continues to trade at a price that is over $60 per ounce below its 2019 high and almost $355 under the 2016 level of long-term technical resistance.

Three factors lead me to believe that platinum will eventually stage a dramatic price recovery. First, compared to the other three precious metals that trade on the COMEX and NYMEX futures exchange, platinum has the highest density and is most heat resistant making it a highly useful industrial metal with a myriad of applications. Platinum discount to palladium and rhodium make its value proposition as an industrial substitute for the other two platinum group metals compelling.

The second factor is platinum’s rarity. While gold production each year is at over the 3,000 metric ton level, only around 250 tons of platinum output annually enhance its value. At the same time, almost all of the platinum production in the world comes from only two countries; South Africa and Russia. In Russia, platinum is a byproduct of nickel production. In South Africa, the low price of platinum has caused a decline in primary production, which led to the deficit in the rhodium market that boosted the price of the other platinum group metal. When production of a commodity falls because of low market prices, shortages tend to follow, which can trigger a price correction to the upside.

Finally, while investors have turned a blind eye to the platinum market, the metal that had the nickname “rich person’s gold” could make a sudden comeback if investment demand increases because of the price action in the gold market. The bottom line is that at over a $570 per ounce discount to gold, platinum offers substantial value from a historical perspective.

I am long platinum, and my average price is above the market, making me feel like a South African producer these days. However, I am not cutting my intake of the metal on price weakness and will continue to add to my long position each time the price dips below the $800 per ounce level. When it comes to taking profits, I will not sell one ounce of my position until the price moved above the $1200 level. Even though that price would yield a substantial gain, I would only sell gingerly after watching the price action in palladium and rhodium. Platinum is a thin market when it comes to liquidity, and a move above the 2016 high could trigger significant progress on the upside.

The most direct route for a long position in platinum is via the physical or futures markets. However, the Aberdeen Standard Physical Platinum Shares product is an instrument that is available to a vast addressable market via standard equity accounts. PPLT has net assets of $583.37 million, trades an average of 76,143 shares each day, and represents one-tenth of an ounce of platinum. The ETF product charges an expense ratio of 0.60% and holds 100% of its assets in physical platinum bullion. 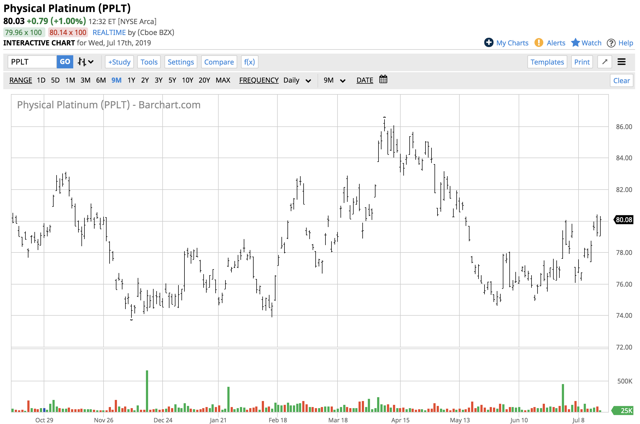