This year has been brutal for the oil patch. Dual shock waves slammed the sector earlier in the year as OPEC and Russia ignited a price war just as oil demand started cratering because of the COVID-19 outbreak.

But global oil producers have since called a truce to help stabilize the market. That seems to be working as crude oil prices have rebounded sharply off their bottom.

Oil could have further to run as the global economy gets back up to speed, which could fuel gains for the oil stocks that survive this year’s downturn. Three that our Motley Fool contributors think stand out as the top ones to buy this August based on that thesis are ConocoPhillips (NYSE:COP), Chevron (NYSE:CVX), and Plains All American Pipeline (NYSE:PAA).

Matt DiLallo (Plains All American Pipeline):This year’s oil market downturn is having some impact on pipeline giant Plains All American. Oil demand cratered earlier this year because of COVID-19, which forced several producers to shut down their pumps temporarily. Because of that, lower volumes will flow through Plains All American’s pipelines this year, which will cut into its cash flow. Overall, the company anticipates that this will affect the earnings of its transportation segment by $300 million, half of which it expects to recoup by capturing market opportunities via its supply and logistics operations.

That revised outlook has the MLP on track to generate about $2.16 per unit in cash this year. That’s enough to cover its 9%-yielding dividend and virtually all its planned capital spending, both of which it reduced because of this year’s downturn to preserve its financial flexibility and balance-sheet strength.

Assuming the company delivers on its revised outlook, it only trades at about 3.7 times cash flow, given its current unit price of around $8 following this year’s 55% sell-off. That’s an insanely low price for a pipeline company.

That cheap valuation suggests it could have lots of upside as the oil market recovers. Add in its big-time dividend, and this oil stock could generate strong total returns from here, making it a compelling way to play a rebound in the oil market this month.

A steady force in an unsteady industry

Daniel Foelber (ConocoPhillips):Unlike many of its upstream peers, the strength of ConocoPhillips’ balance sheet prepared it for the present collapse in oil and gas demand. The largest independent oil and gas producer quietly spent the past four years reducing its debt, selling off weaker assets, lowering its break-even price per barrel of oil, and stockpiling cash on its balance sheet.

That preparation was good timing for 2020, when the company’s low amount of debt and high free cash flow (FCF) has given it a valuable amount of breathing room to make adjustments without debilitating its business. Those adjustments include raising liquidity, reducing 2020 capital expenditures by 35%, suspending share buybacks, curtailing some production in the short term, and reducing costs to make sure that it can pay its dividend. ConocoPhillips looks well positioned to afford its dividend, which currently yields 4.1%.

In a time when many oil and gas companies are cutting their dividends, it can be refreshing to know that ConocoPhillips is far from that conversation. Its annual FCF is currently triple its annual dividend payment, meaning that even as FCF decreases from lost production and less spending, that decrease is unlikely to strain the company’s ability to pay its dividend with cash.

Strong FCF is one reason ConocoPhillips looks to be a great oil stock to buy in August. From a valuation perspective, ConocoPhillips is right up there with EOG Resources as having one of the lowest price-to-FCF valuations in the business, meaning that its shares are relatively cheap.

ConocoPhillips isn’t immune to volatile oil and gas prices, but it has done an impressive job of preparing its business for unexpected challenges. From income investors looking for a solid dividend to those who want to invest in oil and gas in a disciplined way, picking up a few shares of ConocoPhillips in August looks like a reasonable path to take.

Reuben Gregg Brewer (Chevron): If you are looking at oil stocks, one of the best ways to play the space is with an energy major like Chevron. It has exposure to a broad swath of the energy industry, from the upstream (oil drilling) to the downstream (refining and chemicals). That provides diversification that pure plays don’t. Adding to the allure here is that Chevron also has one of the strongest balance sheets in its peer group, with a debt-to-equity ratio of roughly 0.25 times. That would be good for any company and gives it more leeway than its peers to lean on its balance sheet in these turbulent times. 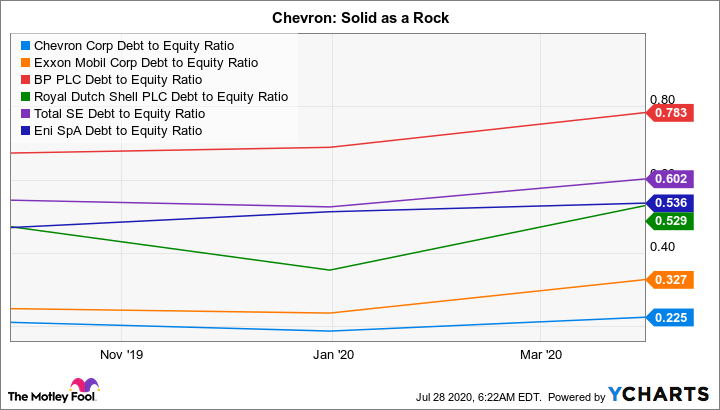 The company also takes a conservative approach with its business, focusing on the long-term supply/demand dynamics and not short-term volatility. That’s notable today, since oil prices are in the doldrums. But for long-term dividend investors, this could be a material opportunity because Chevron’s stock is down and the yield is currently near the high end of its historical range. That suggests the shares are cheap today.